A touchy Dom who doesn’t know how to turn off his Domness.  An unsure sub who is drawn to something he doesn’t understand.  An old queen who has lost more people than she cares to remember, but who will kick the ass of anyone who has the nerve to give up on life or love.

Add in some family drama and a bar where the Old Guard Leather crowd runs up against the yuppie Safe-Sane-Consensual crew, and you get In the Weeds.

Nothing matches the joy of knowing someone likes your work enough to publish it.  Yes, I love my flist and I love all the great feedback I got on this one, but Dreamspinner is putting their money where their mouth is, which implies that they *really* like it.  Well, that and getting a paycheck is mighty nice.

You see, as a writer, it’s so easy to think that every idea sucks.  Actually, I start every book thinking it’s the greatest thing since sliced bread.  About halfway through I start wondering what the hell I’m doing, and then I pretty much want to hide the whole draft on my hard drive and never let it out.

I have a lot of half-written ideas from the fanfic Happiness Curve (Part three of the Shaman Xander Learning Curve series) to the original Customary Miracles (A shy writer who has always fit in because he’s never really found himself meets a professor from India who has never fit in because he’s always known who he is).  If I had a fire and lost my harddrive and my back up at the same time, a few dozen novels would die a brutally quick death.

But selling a novel makes all the pain worth it.  I wrote something good.  I must have.  They’re paying for it. 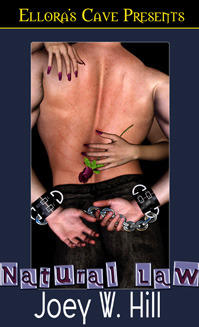 Submissive Alpha Males.  Mmmmm.  I do love me some of that.

And I found some of that!

Natural Law paid off in spades.  Mac Nighthorse is an alpha male, but unlike Jacob, he is a true submissive.  He may be a damn good cop, but that doesn’t keep him from enjoying being totally controlled by a strong woman.

Actually, Jacob and Tom from Blowback could throw back a few beers and enjoy talking about just how much they like having women take total control. They are both comfortable being strong, dominant men at work or in a fight, and then laying all that strength down at the feet of their women. I really loved that I could believe Mac’s submission here.

And there be plot.  Okay, so it’s not a lot of plot, and the motivations of the killer felt a little off, but I try to remind myself that not everyone has a degree in psychology or has taken criminology classes, so I’ll try to let that one slide, especially since I tend to exaggerate my villains myself.

I just enjoyed that there was actual plot that took up more than three sentences.  If I had to summarize the two vampire books, it would literally take me that long.  This book has interesting secondary characters and misdirection and plot.  I like Mac’s boss and coworkers, I believed the disdain his fellow detectives showed when they found their murder victims were submissive males (that’s not popular in American culture), and I liked Violet’s coworkers.  I can’t say I love the reveal of the murderer, and had a squicky moment there, but bad guys are supposed to be squicky.

But in the end, what I really loved is that I could see these two forming a united front against the world… not only the murderer, but the discrimination and the judgment of society.  They supported each other, and to me that’s the hottest kink in the world.  Bar none. So Emma, good recommendation.  I really enjoyed this one.

Now, that’s not to say the book is perfect.  Seriously, I don’t think I’ve ever seen any domme dress up that much, so some of the descriptions felt a little like a tableau painted for a male eye. And it amazes me how many of these BDSM books features people with access to hundreds of thousands of dollars in equipment and gear. Again, I notice that fantasy element a little too much, and I like a slightly more mundane edge on my stories with people who do things I could imagine myself doing… and trust me, I do not have twenty thousand dollars to set up a dungeon.

However, this one is a keeper. In fact, I think I’ve invested about $32 in the three Hill books, and this one made up for that expense.

Some might argue that personal rejection hurts worst, but for a writer, professional rejection feels pretty damn personal.  I sent out a proposal for a piece I’m doing, and my baby was rejected before taking its first breath.

They followed up with, “we felt the romantic development was too subtle. The majority of scenes between Stunt and Alex only hint of their mutual attraction. Although there is plenty of conflict between the two men, that conflict seems more focused on the suspense aspects of the story rather than on the romantic development that our readers demand.”

I guess it would hurt less only the parts they don’t like are the very parts of the story I do like.  I write for myself first and foremost, and the problem is that I’m clearly out of sync with the rest of the world.

I read the first two novels, and they have so much going for them:  Jacob’s streak of self-sacrifice, Lyssa’s hard heart with that Tootsie-soft center, the danger… it should be perfect for me.

I kept wondering how the hell Lyssa had survived for a thousand years when she spends more time worrying about Jacob’s ass than the dozen vampires trying to destroy her.  Seriously… what is up with that?

And there were so many sex scenes that I found myself skipping over them because I wanted to know how these two could form a united front against the world.  I didn’t need to see two fronts uniting over and over (or a front and a back, or a mouth and a cunt).

So my problem is that I could take my story and focus the story on the romantic conflict instead of the “suspense aspects,” but I don’t want to.  In my story, Alex has lost his brother.  If his reaction to that death includes having sex with Stunt on very available surface, I’m going to think less of him. I just am.

So the rejection feels so very personal.

Too late, I remember why I don’t do proposals.  The creativity required to write is a tissue-paper flower.  It’s easily frayed and ripped.  The petals threaten to fall off at the least breeze, and I put it out in a storm.

Okay, so it was more of a brisk wind because that was a particularly kind rejection, one that even asked me to come back if I could write something that conformed to their guidelines better.

Variety may be the spice of life, but for some people, variety in the bedroom annoys them.  Some people always take dominant roles.  Lady Joy, a beautiful Domme I met at a play party, said she cannot even come without dominating someone, usually in rather severe ways.

The live-in submissive of an Internet friend commented that he can’t even understand switches.  He always needs to be controlled and hurt.  Personally, I am a little more flexible, but only under certain circumstances.  I would pretty much spork my eyes out before submitting to a man or letting his dick near me, which doesn’t mean I couldn’t have fun playing with one.  Sorry guys, nothing personal, but that’s just my dynamic. I’m far more into (and flexible with) women. Everyone has their own limits.

However, I am so tired of reviewers denying this simple truth.

“She’s like most women—she thinks all men have fixed roles!” they wail.

Yes, wail.  That’s how I “hear” the words when I read reviews like that.

Tom in Blowback always wants to submit (and preferably to women where his trust issues are less likely to make him fight the restraints).

Temar and Shan in the Desert World books are flexible. Events have made Temar a little hesitant, but by the end of Desert World Rebirth, we have plenty of flexibility.

Jeremy is not flexible at all.  The protagonist of Out of Balance is a bit of a pain slut (or a lot of one) and he really needs bondage and pain to get his groove on. On the other hand, Ferro from “Shepherd Slave and Vow” is just a happy slut.  He’ll try anything, anytime. Top, bottom, or in the middle—he’s good with it all.

However, I’ve had about three reviewers wailing (yep, an unfair characterization and unnecessary editorialization that I’m going to keep using because it makes me feel better) that “like most women” I think men have fixed sexuality.

So, in some of my stories, you’ll find those who are flexible.  Vin from my upcoming In the Weeds is all Dom all the time. In fact, he has trouble reining in his urges to both dominate and play papa-bear all the time.  However, as much as he loves to dominate, he is happy to be the pitcher or the catcher.  So he’s half-flexible.  Stunt from my in progress Mountain Prey really does need to be tied up and taken hard to let go, so he’s inflexible.  Rahul Dwivedi from a book still in draft and blurb stage is so flexible it will break your mind.  Fireplay, topping, bottoming, sensation play… if he hears about it, he wants to try it.  All of it.

Personally, I’m going to keep writing books with characters as different as the people I know in real life.  RJ is a woman who identifies as a man. Miss Dolphinia is a pushy old queen who is as dominant as they come. Nikolai prefers hand-jobs or oral sex, while Carl wants to be the “catcher” every time.

Variety is the spice of life, but only some people want a spicy bedroom. That’s okay, too.